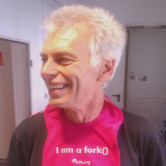 "The first Free Software I interacted with was Donald Knuth's Metafont and TeX, I guess in about early 80s. Back then I was not so much impressed by the idea that the software is free, but rather by the enormous effort its author did to make its inner workings accessible (pretty well expressed by the device of "literate programming")".

Tomás Zerolo: I've always been a fan of the FSF and by the ideals carried by the GPL. When I became aware of the FSFE (around 2005), I always thought I had to contribute. I kept postponing it, because at the time I was a precarious freelancer: no time, no money. When I came to Berlin and had -- for a time -- a good paying job, I ran out of excuses I was lucky to meet a very nice and inspiring local supporter group.

I'm mainly having fun. Fun with the people in the local group, fun behind a booth, all that kind of things. And doing some advocacy here and there.

And what is the most fun part about engaging for FSFE?

The people. You are all awesome. It feels great to be part of it.

As the local coordinator Berlin, is the capital of Germany an attractive spot for Free Software enthusiasts?

It's most definitely an interesting place. I think Berlin's diverse and open atmosphere, and its not-yet-finished status rhymes pretty well with the ideals of Free Software.

It empowers users, i.e. all of us.

That's a tough one. But if I had to choose, I'd choose Gnu Emacs, because it's not only free in the four-freedoms sense, but because it goes out of its way to make its inner workings accessible to the user: if you invoke its help system, it doesn't only lead you to a function's documentation, but also to its source code.

I think we should network with other related groups outside of the software bubble: all those concerned with (individual) freedom, empowerment, sustainability. Software is sneakily taking over, without society at large really taking notice, and is influencing us in alarmingly deep ways already -- the decisions being taken by a few at the top of a few powerful commercial (and state) entities. It's about time software isn't considered any more as something "for specialists" and that society at large takes part in helping shape it. We'll need the four freedoms for that, but I think we'll need more than just that.