The FSFE empowers users to control technology with its diverse activities and concrete engagement for software freedom. Follow us and make sure to receive regular updates and deeper insights on our various channels.

Report of the first ever FSFE summit

From September 2nd to 4th, the FSFE organised its first ever summit to bring together our pan-European community and Fellows for a whole weekend and to discuss contemporary and important issues regarding software freedom. On this occasion we also held our official party to celebrate 15 years of FSFE. Read our report including some pictures of the event and find a summary with all talks that have been held with links to our video-recordings.

This month the FSFE newsletter comes for the first time with a call to raise our funds and progress in Russia to further Free Software on political level. Also read about our various activities or participate in our discussion about "Free Software business". As in every newsletter, you also find our out-of-the-community section with interesting news from our community and some good Free Software news from around the world. 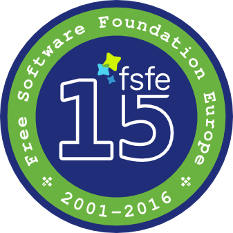 [Blog] There is no Free Software company - But!

Legislators have drafted a bill that will boost Free Software on multiple levels within the Russian Federation's public sector.

This month the FSFE newsletter comes with a public consultation on our Fellowship brand. Read the background and do not miss your chance to participate. Also read about the take-over of FSFE's Vice-presidency by Heiki Löhmus and the ongoing revision of the European Interoperability Framework. As in every newsletter, you also find our out-of-the-community as well as a what-we-have-done section with some good Free Software news and highlights of our press coverage.

Last weekend, the FSFE visited Oberhausen to participate in OpenRheinRuhr, a well-known Free Software event in north-western Germany. We had a strong booth team, gave talks, and enjoyed talking to tons of like-minded people about politics, technology and other stuff. In this blog post you will learn about some highlights of the weekend and what coat hangers have to do with flat irons.

Alessandro Rubini has stepped down as Vice-president of the FSFE. Alessandro, an electronic engineer with Ph. D. in a computer science, brought invaluable insight to the internal discussions within the FSFE and has worked tirelessly to push the Free Software envelope in Italy and the rest of Europe.

Call for sessions at the FSFE assembly during 33C3

From December 27 to 30, the FSFE will host an assembly during the 33rd Chaos Communication Congress (33C3) including an information booth, self-organised sessions and a meeting point for all friends of Free Software to come together, share or simply relax. We are looking forward to organise sessions in the name of our assembly and we will book proper rooms or offer our assembly itself. Sessions can be inspiring talks, hands-on workshops, community/developer/strategy meetings or any other public, informative or collaborative activity.

Topics can be anything that is about or related to Free Software. We welcome technical sessions but we also encourage to give non-technical talks that address philosophical, economical or other aspects of/about Free Software. We also like sessions about related subjects that have a clear connection to Free Software for example privacy, data protection, sustainability and similar topics. Finally, we welcome all backgrounds – from your private project to global community projects. If you are interested, read more about our call for participation.

FSFE is a charity dedicated to empowering users to control technology. We are working to build freedom in digital society. We operate in a lively environment with volunteers from many countries. We are looking for a technical intern to join our team for three months, taking part in the work to rewrite and implement a new account management system.

On 14 September the European Commission (EC) published its long-awaited proposal for a Directive on copyright in the Digital Single Market. While we welcome the proposal to introduce a mandatory exception for 'text and data mining' (TDM) in the field of scientific research, we are concerned about the inclusion of a far-reaching "technical safeguards" clause granted to rightholders in order to limit the newly established exception.

Julia Reda ended the QtCon, a conference for the Free Software community, with a closing keynote on, among other things, Free Software in the European Public Sector.

The Document Foundation and the FSFE strengthen their relationship

In Memory of our Friend Elias Diem

In the afternoon of Saturday 6 August, our friend and active Fellow Elias Diem passed away. He was on his way back home from a hiking trip with a friend in the Swiss alps. He slipped and fell about 150 meters. His friend tried to rescue him, but it was too late. He died of a heavy head injury at the age of 39.

Compulsory Routers: what customers have to take care of now

Up until now, Internet service providers (ISPs) in Germany determined the router users had to use to connect to the Internet. The user had no say in this decision. This changes on August 1. A new law will allow users choose the device that gets installed in their homes. The FSFE wants to ensure everybody knows about their new rights and is asking users to report cases in which ISPs try to avoid the new regulation.

Imagine a European Union that builds its IT infrastructure on Free Software. Imagine European Member States that exchange information in Open Standards and share their software. Imagine municipalities and city councils that benefit from decentralized and collaborative software under free licenses. Imagine no European is any longer forced to use non-Free Software... This is what we are seeking. And although this vision feels like a long road to go, we know that we are taking major steps along it today. To help unlock our full potential on this road, FSFE offers cross-border collaboration and in 2016 its first European summit. Join us and our movement.

The Free Software Foundation Europe protects users, companies and institutions from technological abuse by promoting the use of Free Software. Now there is a project that protects the code used in Free Software itself and promised to preserve it for the future: Inria presents the Software Heritage initiative.

The European Commission is asking for public input with regard to its plans to renew the European Interoperability Framework (EIF). The EIF aims to promote enhanced interoperability in the EU public sector. The document, originally intended as a set of non-binding guidelines for the EU public administration, is going through its third revision since its initial adoption in 2004. The FSFE has prepared its comments for the draft of the revised guidelines.

And the winner of the election for FSFE's Fellowship GA seat is ...

Call for Participation for the first FSFE summit

In 2016, the FSFE is celebrating 15 years of existence. What started as a small group of volunteers has grown into a European wide movement with actively supporting members in more than 20 countries. We dedicate this birthday to our community, to those who made us grow strong in the past 15 years - with the first ever FSFE summit on September 2 – 4, taking place in the Berlin Congress Center, Germany. If you like to be part of it, save the date and take part in the call for participation.

EU jeopardises its own goals in standardisation with FRAND licensing

On 19 April, the European Commission published a communication on "ICT Standardisation Priorities for the Digital Single Market" (hereinafter 'the Communication'). The Digital Single Market (DSM) strategy intends to digitise industries with several legislative and political initiatives, and the Communication is a part of it covering standardisation. In general, the Free Software Foundation Europe (FSFE) welcomes the Communication's plausible approach for integrating Free Software and Open Standards into standardisation but expresses its concerns about the lack of understanding of necessary prerequisites to pursue that direction.

From teaching people to use encryption for their e-mail, to changing the direction of policy on a European level, the Free Software Foundation Europe worked hard in 2015 to empower users to control technology. With welcome help from our donors and contributors, we set out with ambitious goals for the year. We saw a lot of improvements in how we work, and we ended the year positively with a lot to look forward to in 2016. Please enjoy this story of (some!) of our work over the year, and thank you for helping us make the world a better place!

Sunday 14 February 2016 was a day to declare love for people we care for. On this day, as a yearly tradition, the Free Software community celebrates "I love Free Software" day to thank developers behind Free Software. This year, for the 6th time, FSFE asked everyone to participate and express their appreciation and gratitude to their favourite Free Software contributors.

It's time to say "thank you" on 14th of February, the "I love Free Software" Day 2016. The Free Software Foundation Europe asks all Free Software users to use the traditional day of love to think of the hardworking people contributing to the Free Software we all depend on. As every year there are many ways for people to participate in this online campaign which has first been celebrated five years ago.

Traditionally, Brussels is the place to go for Free Software enthusiasts and developers at the end of January. During FOSDEM, hundreds of experts talk about their beloved project and discuss the past, present and future of Open Source. It is a great place for meeting like-minded people.

FSFE's input on ICT standards for the Digital Single Market

FSFE provided the European Commission input on setting priorities in ICT standards and answered to the public consultation on the adoption of a Priority ICT Standards Plan which has been proposed in the Digital Single Market (DSM) strategy.