The FSFE empowers users to control technology with its diverse activities and concrete engagement for software freedom. Follow us and make sure to receive regular updates and deeper insights on our various channels.

The last 12 months in the light of software freedom

In the last 12 months, we have achieved a lot with the help of our volunteers, through their donations and hard work. Thanks to their support, we were able to successfully continue our PMPC campaign, simplify licensing practices through our REUSE initiative, and stand up for router freedom in Europe. We will be back in 2020 with even more vigour towards our work. Please help us with a donation so that we can continue our successful commitment to Free Software.

The Free Software Foundation Europe welcomes the conservantive CDU's party convention resolution on the use of Free Software. At its 32nd party conference this weekend, the CDU ("Christian Democratic Party") resolved to join FSFE in demanding that software developed with public money should be publicly available as Free Software. This decision aligns with our "Public Money, Public Code!" campaign, which is supported by over 170 organisations and 26,000 individuals.

Input for the BEREC's guidelines on Router Freedom in Europe

Router Freedom is the right of customers of any Internet Service Provider (ISP) to choose and use a private modem and router instead of a router that the ISP forces them to use. The Body of European Regulators for Electronic Communications (BEREC) drafted guidelines for national agencies how to deal with Router Freedom in their countries. The Free Software Foundation Europe (FSFE) provided mixed feedback to an ongoing public consulation.

How we fixed DRM in Portugal (and so can you)

Our EU-wide campaign "Public Money? Public Code!" has made it to the city parliament in Kassel (Germany). The parliamentary group, consisting of FDP, Freie Wähler (Free Voters) and Pirates, has proposed a motion "Public Money - Public Code as a Principle in Software Procurement". The motion calls on the magistrate to follow the principle of "Public Money, Public Code" when purchasing new software and to focus increasingly on Free Software as well as Open Standards.

Call for sessions "about:freedom" during 36C3

In the context of the 36th Chaos Communication Congress happening from December 27th to 30th in Leipzig, the FSFE is happy to host an assembly again inside the cluster "about:freedom". We offer attention and a stage for self-organised sessions by and for our community and friends, and this is our call for participation.

The right of choosing your own modem and router is a basic precondition for a neutral, safe and healthy digital environment. If you cannot control your router, it is not free and your digital freedom is likely to be compromised. For years, the FSFE has been successfully fighting for Router Freedom in Germany. Now the debate has reached the European level with Internet Service Providers imposing their specific routers to customers. The FSFE has prepared an activity package for people and organisations interested in advocating for their freedom of choice.

"Software Freedom in Europe" is the yearly report of the Free Software Foundation Europe e.V. (FSFE). In one document, it gives you a breakdown of important things the FSFE has done and achieved during the last 12 months. Among many other interesting stories, in the 2019 report you will read about our ongoing work for router freedom in Europe, about the first Parliament in Europe who joins our "Public Money? Public Code!" campaign, about our new version of REUSE tools to help Free Software developers with easy license compliance and about much more of our multi-faceted policy work - all together aiming at a world in which users are in control of technology!

At this year's General Assembly, which took place in Essen, Germany, on 12 October, the members of the FSFE re-elected Matthias Kirschner as the president, Heiki Lõhmus as the vice president, and Patrick Ohnewein as the financial officer for another two-year term. Today is the Day Against DRM

Join us and the Free Software Foundation in the fight against DRM! Digital Restrictions Management (DRM) is any technology that is built into an electronic product or service with the aim of limiting its use. It is designed to prevent customers from using digital technology in ways that do not correspond to the business agenda of a content provider or device manufacturer.

At the end of September together with Open Forum Europe we organised a meeting in Brussels to bring together Free Software experts from around Europe. Goal of the meeting was to discuss Free Software and its driving role in the digital transformation in Europe, and in particular how the European institutions can further facilitate these developments.

Be part of this year's FSFE community meeting

In less than 2 months this year's FSFE community meeting will take place between 15 and 17 November at the SFScon in Bolzano, Italy. There will be inspiring talks, both from within the FSFE community as well as from the SFScon accompanied with a lot of social gatherings. No matter if you are a longtime volunteer or you have never heard about us before - everyone who is interested in the FSFE is welcome to join.

Richard Stallman resigns as president of the Free Software Foundation

On 16 September, one of our independent sister organisations, the US-based Free Software Foundation (FSF), announced the resignation of Richard M. Stallman as its president. While we recognise Stallman's role in founding the Free Software movement, we welcome the decision.

Since 2014, a European Directive has the effect of hindering users to load software on their radio devices, devices such as mobile phones, laptops and routers. While the European Commission recently closed a feedback period, where citizens shared their thoughts about the impact of the Directive, the FSFE worries that such feedback could very well go unheeded. Learn more about the feedback received, and what lies ahead. 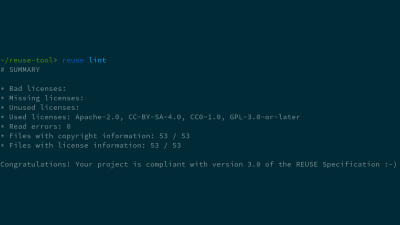 The Impact of Free Software on competition by Prof. Dr. Simon Schlauri

Do public administrations distort the market through the release of Free Software? An article by Prof. Dr. Simon Schlauri about the legal and economic arguments resulting from this question and originally written for our Public Money? Public Code - policy brochure. 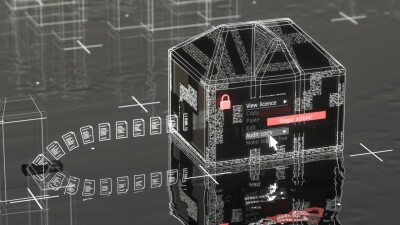 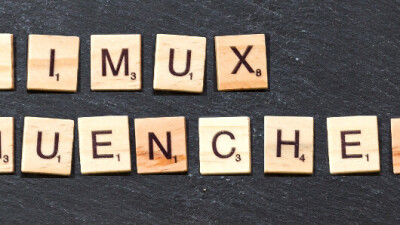 More than two years ago, Munich abandoned their strategy of developing an independent IT infrastructure built with Free Software and the free operating system GNU/Linux and went back to depending on proprietary software. We followed this process closely and like to give an update today about what has happened since then in Munich and in Europe in general. Did we manage to gain more independence and control over our IT or did dependencies on monopolies increase over the past two years? 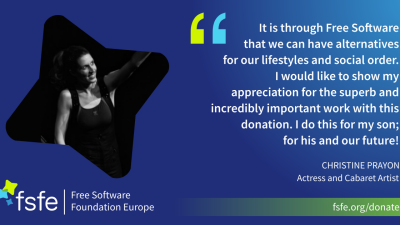 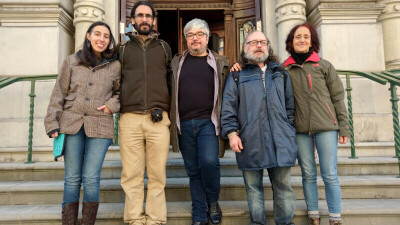 How the Parliament of Asturias decided to sign the open letter demanding "Public Money? Public Code!" - an interview with Iyán Méndez Veiga

"The Parliament of Asturias commits itself to the international "Public Money, Public Code" campaign" - this is a quote from the first demand in a recent proposal brought by the Parliament of Asturias to its government. It is also the happy end of continuous lobbying efforts from Oviedo's local hackerspace "Pica Pica Hacklab", using the FSFE's campaign material mixed with their self-developed brand of social hacking. Meanwhile, the Parliament of Asturias backed up its words with deeds and officially signed the open letter of our "Public Money? Public Code!" campaign - being the very first Parliament to do so. To shed light on this successful story and inspire local groups around the world, we conducted an interview with Iyán Méndez Veiga, member of Pica Pica Hacklab.

On Thursday 14th of February, we acknowledge and celebrate the annual "I love Free Software Day". It is the day to express your love for Free Software and gratitude for your favourite pieces of Free Software. The Free Software Foundation Europe would like to say a huge thank you to everyone who participated and helped making this day a special one for everyone involved.

The European Parliament adopted the controversial Copyright Directive by 348 votes in favour, 274 votes against and 36 abstentions. Today's vote marks the end of years of debate in the European Union. Heated discussions about the introduction of upload filters ended up in protests of hundreds of thousands of people in the streets all across Europe. In a last minute action back in September 2018, the European Parliament adopted an amendment and pushed it through the trilogue to at least protect Free Software developing platforms.

International Women's Day: No freedom without diversity and gender equality

Today, the FSFE celebrates International Women's Day, a global day calling for women's rights and gender parity. As in many other communities, women in Free Software communities face gender discrimination on a daily basis. To help improve their environment and raise awareness, the FSFE wants to use today's occasion to share our ongoing efforts to improve gender balance and ensure gender equality.

Today, as with every year on February 14th, people around the globe are celebrating "I love Free Software" Day by expressing their love and thanks to all the people working behind each Free Software project. Follow the love with the hashtag #IloveFS today and add your own love dedication to the stream!

The discussion of the Huawei security concerns showcases a general trust issue when it comes to critical infrastructure. A first step to solve this problem is to publish the code under a Free and Open Source Software licence and take measures to facilitate its independently-verifiable distribution. 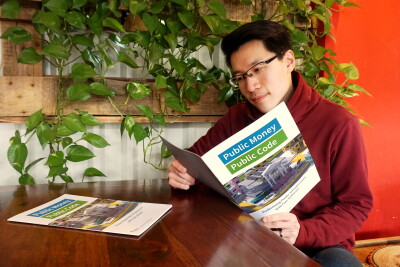 Why should governments develop Free Software? Where is Free Software already generating benefits in the public sector? What are Free Software business models? Answers to these questions and practical guidelines are given in the new expert policy brochure published today by the Free Software Foundation Europe. Produced with decision-takers in mind, the brochure will be a helpful source of information for candidates and parties running for the European Parliament election. Downloads and prints are available under a Creative Commons license.

We are looking for a Fundraising Manager to support our work to empower people to control technology. The person will work 35 hours per week with our team in the Berlin office, being in charge of the FSFE's individual and corporate fundraising.